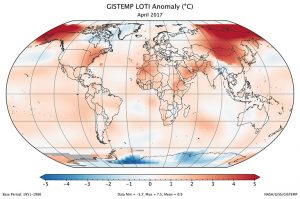 A NASA report notes that April 2017 was second-warmest April on record.

April 2017 was the second-warmest April in 137 years of modern record-keeping, according to a monthly analysis of global temperatures by scientists at NASA’s Goddard Institute for Space Studies (GISS) in New York.

If you like the cool map here that was in the NASA report you can make your own for various time period at Global Maps from GHCN v3 Data. This is a great app and can be used for discussions about means vs distributions in stats or QL classes, for example. The article also has links to data sources.

Thomas J. Pfaff is a Professor of Mathematics at Ithaca College. He created this website because he believes that sustainability, ranging from climate change to social justice, should be included in all courses whenever possible.
Previous Pay Inequality
Next A Feedback Loop: The Alaska Tundra