A Feedback Loop: The Alaska Tundra 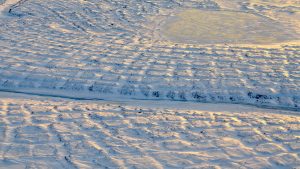 A recent NASA report Alaska tundra source of early-winter carbon emissions provides another example of a feedback loop. Global warming has slowed the refreezing of the Alaska tundra allowing for increased CO2 releases.

A new paper led by Roisin Commane, an atmospheric researcher at Harvard University in Cambridge, Massachusetts, finds the amount of carbon dioxide emitted from northern tundra areas between October and December each year has increased 70 percent since 1975.

“In the past, refreezing of soils may have taken a month or so, but with warmer temperatures in recent years, there are locations in Alaska where tundra soils now take more than three months to freeze completely,” said Commane. “We are seeing emissions of carbon dioxide from soils continue all the way through this early winter period.”

How much carbon is stored in the frozen soils. According to the report

The soils that encircle the high northern reaches of the Arctic (above 60 degrees North latitude) hold vast amounts of carbon in the form of undecayed organic matter from dead vegetation. This vast store, accumulated over thousands of years, contains enough carbon to double the current amount of carbon dioxide in Earth’s atmosphere.

Thomas J. Pfaff is a Professor of Mathematics at Ithaca College. He created this website because he believes that sustainability, ranging from climate change to social justice, should be included in all courses whenever possible.
Previous April Second Warmest on Record
Next Employment Report for the Class of 2017