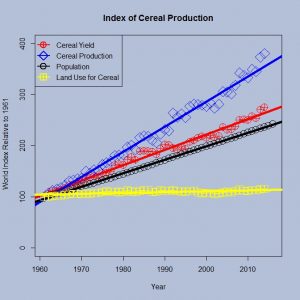 Most of our improvements in cereal production have arisen from improvements in yield. The average cereal yield has increased by 175 percent since 1961. Today, the world can produce almost three times as much cereal from a given area of land than it did in 1961. As we will explain below, this increase has been even more dramatic in particular regions.

Along with world data there is also regional data.  Almost all of the data is useful for linear regression and the article itself has interactive graphs for a QL course.  Note also that there is world grain data in the statistics projects section of this blog.

Thomas J. Pfaff is a Professor of Mathematics at Ithaca College. He created this website because he believes that sustainability, ranging from climate change to social justice, should be included in all courses whenever possible.
Previous Who is Responsible for Unwanted Sexual Advances?
Next Ocean Heat Content and Climate Change