Are teachers being paid fairly? 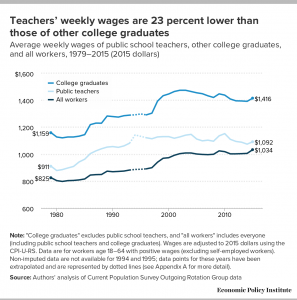 An August 2016 report by EPI, The teacher pay gap is wider than ever (8/9/16 by Allegretto and Mishel), suggests not. For instance, the graph here shows that teachers are paid 23% less than other college graduates in 2015 and the gap has been increasing since 1980.

For all public-sector teachers, the relative wage gap (regression adjusted for education, experience, and other factors) has grown substantially since the mid-1990s: It was ‑1.8 percent in 1994 and grew to a record ‑17.0 percent in 2015.

The report includes 8 graphs with data plus two tales. There are comparisons between females and males, as well as union and non-union.

Thomas J. Pfaff is a Professor of Mathematics at Ithaca College. He created this website because he believes that sustainability, ranging from climate change to social justice, should be included in all courses whenever possible.
Previous What is known about world income inequality?
Next How much has growing season/allergy season increased in your town?