What is the CEO to worker pay gap? 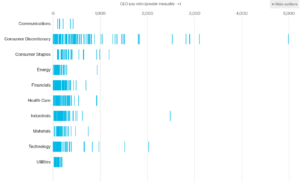 U.S. Publicly held companies now have to report CEO and median worker salaries (this was part of the Dodd-Frank Wall Street Reform and Consumer Protection Act of 2010) and Bloomberg has an article, Alphabet CEO Page Makes a Tiny FractionCompared to Its Median Employee by Alicia Ritcey and Jenn Zhao (5/15/18), with an interactive graph (see image).   Mattel “wins” with a CEO to median worker pay ratio of 4,987-1. Walmart “wins” in the consumer staple category with 1,188-1 ratio.  In the interactive graph there is a button on the top right that hides outliers. This is useful, but be conscious of whether it is on or off.

The Guardian article ‘CEOs don’t want this released’: US study lays bare extreme pay-ratio problem by Edward Helmore (5/16/18)  provides some context and a summary.  The Bloomberg graph is being updated daily.  Rep. Keith Elliston’s staff prepared the report Rewarding or Hoarding? An Examination of Pay Ratios Revealed by Dodd-Frank, which has the data of the first 225 Fortune 500 companies to report and and details on the data collection. The data in the report can be used in statistics courses to test differences by sector.  At some point maybe Bloomberg will post a spreadsheet of the data (one can also ask for it too).

Thomas J. Pfaff is a Professor of Mathematics at Ithaca College. He created this website because he believes that sustainability, ranging from climate change to social justice, should be included in all courses whenever possible.
Previous What is an explanation for the racial disparities in student loan debt?
Next What are the prospects for new college grads?