Where are women less likely than men (ages 30-70) to die of a major disease? 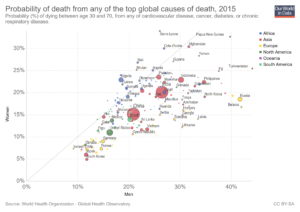 The Our World in Data post, Why do women live longer than men?  by Esteban Ortiz-Ospina and Diana Beltekian (8/14/18) answers the question with the graph copied here.

As the next chart shows, in most countries for all the primary causes of death the mortality rates are higher for men. More detailed data shows that this is true at all ages; yet paradoxically, while women have lower mortality rates throughout their life, they also often have higher rates of physical illness, more disability days, more doctor visits, and hospital stays than men do. It seems women do not live longer than men only because they age more slowly, but also because they are more robust when they get sick at any age. This is an interesting point that still needs more research.

Interestingly, it seems that  except for Bhutan it is only countries in Africa where women are more likely to die of a major disease.  The article is an excellent example of telling a story with data while also posing questions.

The evidence shows that differences in chromosomes and hormones between men and women affect longevity. For example, males tend to have more fat surrounding the organs (they have more ‘visceral fat’) whereas women tend to have more fat sitting directly under the skin (‘subcutaneous fat’). This difference is determined both by estrogen and the presence of the second X chromosome in females; and it matters for longevity because fat surrounding the organs predicts cardiovascular disease.

But biological differences can only be part of the story – otherwise we’d not see such large differences across countries and over time. What else could be going on?

Thomas J. Pfaff is a Professor of Mathematics at Ithaca College. He created this website because he believes that sustainability, ranging from climate change to social justice, should be included in all courses whenever possible.
Previous What do we know about nighttime minimum temperatures?
Next How much has the High Plains (or Ogallala) aquifer declined?