How are U.S. CO2 emissions changing? 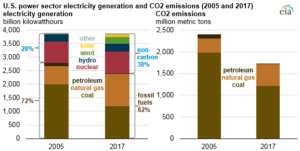 The recent EIA report Carbon dioxide emissions from the U.S. power sector have declined 28% since 2005 (10/29/18) provides the graphic (copied here) showing the changes of the source of electricity generation and corresponding changes in CO2 emissions from 2005 to 2017.

Overall U.S. CO2 emissions have declined in the last three years (see figure 1 in the second report), but unfortunately according to the IEA after little change from 2014-2016:

Global energy-related CO2 emissions grew by 1.4% in 2017, reaching a historic high of 32.5 gigatonnes, a resumption of growth after three years of global emissions remaining flat.

Further, according to the Quartz article Instead of falling, global emissions are set to rise in 2018 by Akshat Rathi (10/8/18)

“When I look at the first nine months of data, I expect in 2018 carbon emissions will increase once again. This is definitely worrying news for our climate goals,” Fatih Birol, executive director of the IEA, told the Guardian. “We need to see a steep decline in emissions. We are not seeing even flat emissions.”

Glen Peters of the Center for International Climate Research says he agrees with Birol’s assessment. Emissions from both China and the US, the world’s two largest emitters, are up in the first nine months of the year. The reason is likely tied to strong economic growth, according to Peters.

Thomas J. Pfaff is a Professor of Mathematics at Ithaca College. He created this website because he believes that sustainability, ranging from climate change to social justice, should be included in all courses whenever possible.
Previous Who votes?
Next How does the digital divide impact secondary education for different groups?