How do we take the temperature of the oceans?

The recent BBC article Climate change: Oceans ‘soaking up more heat than estimated’  by Matt McGrath (11/1/18) reports the result from a recent study showing that the oceans have warmed more than previously thought.  How did they do it? In short, from the BBC article:

The key element is the fact that as waters get warmer they release more carbon dioxide and oxygen into the air.

“When the ocean warms, the amount of these gases that the ocean is able to hold goes down,” said Dr Resplandy.

“So what we measured was the amount lost by the oceans, and then we can calculate how much warming we need to explain that change in gases.”

The image here is copied from the original article in Nature, Quantification of ocean heat uptake from changes in atmospheric O2 and CO2 composition by Resplandy et. el (10/31/18) . The abstract to the paper provides a nice summary:

The ocean is the main source of thermal inertia in the climate system1. During recent decades, ocean heat uptake has been quantified by using hydrographic temperature measurements and data from the Argo float program, which expanded its coverage after 20072,3. However, these estimates all use the same imperfect ocean dataset and share additional uncertainties resulting from sparse coverage, especially before 20074,5. Here we provide an independent estimate by using measurements of atmospheric oxygen (O2) and carbon dioxide (CO2)—levels of which increase as the ocean warms and releases gases—as a whole-ocean thermometer. We show that the ocean gained 1.33 ± 0.20  × 1022 joules of heat per year between 1991 and 2016, equivalent to a planetary energy imbalance of 0.83 ± 0.11 watts per square metre of Earth’s surface. We also find that the ocean-warming effect that led to the outgassing of O2 and CO2 can be isolated from the direct effects of anthropogenic emissions and CO2 sinks. Our result—which relies on high-precision O2 measurements dating back to 19916—suggests that ocean warming is at the high end of previous estimates, with implications for policy-relevant measurements of the Earth response to climate change, such as climate sensitivity to greenhouse gases7 and the thermal component of sea-level rise8.

The paper has other interesting graphs that could be used in a QL based class. For a calculus class, the graph here is an example of the use of the Δx notation in the “real world”.

How much are the oceans warming? 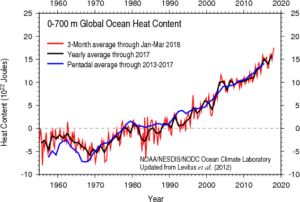 A year ago Climate Central posted the article Oceans Are Heating Up with a graph of sea surface temperature anomalies while providing context on issues of ocean warming:

93 percent of the excess heat absorbed by the climate system goes into our oceans, creating major consequences. While more extreme storms and rising sea levels are some of the impacts of warmer oceans, rising CO2 levels and the resulting warmer oceans are impacting ocean health itself. The most well­ known effects are coral bleaching and ocean acidification, but an emerging issue is the decreasing oxygen levels in the warming waters.

For context on units, a person at rest typically generates about 60 joules of heat per minute while the graph here has y-axis units of 10^22 Joules. 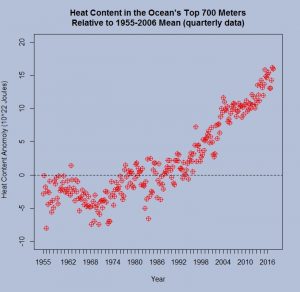 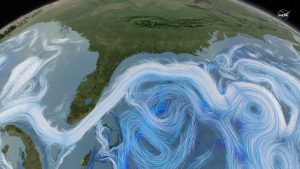 Ocean currents are a complex mechanism that contribute to absorbing CO2 and heat. The NASA article, NASA-MIT study evaluates efficiency of oceans as heat sink – atmospheric gases sponge, discusses the role of ocean currents as part of climate change. The possible feedback loop is suggested by this:

In addition, they found that in scenarios where the ocean current slows down due to the addition of heat, the ocean absorbs less of both atmospheric gases and heat, though its ability to absorb heat is more greatly reduced.

The article includes this must see 40 seconds animation of ocean currents and a engaging 3D graph with the depth of the ocean as the z-axis: