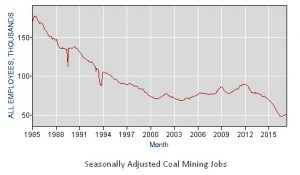 The Washington Post’s Fact Checker article Pruitt’s claim that ‘almost 50,000 jobs’ have been gained in coal includes links to the Bureau of Labor Statistics data for each of their three screen shots of spreadsheets that back up their statements. The article notes:

While not part of the article, the graph here from the BLS is seasonally adjusted coal mining jobs since 1985.  Interestingly there was a drastic decline in coal mining jobs from 1985 until about 2000.

Thomas J. Pfaff is a Professor of Mathematics at Ithaca College. He created this website because he believes that sustainability, ranging from climate change to social justice, should be included in all courses whenever possible.
Previous Worldwide LGBTQ Rights Scorecard with Data and Methodology
Next Who eats more fast food the poor or wealthy?