What are the prospects for new college grads? 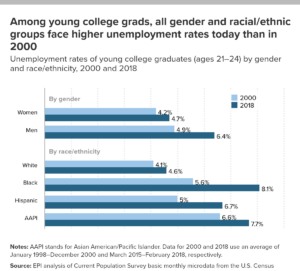 EPI has an answer with its report Class of 2018 College edition by Elise Gould, Zane Mokhiber, & Julia Wolfe  (3/10/18).  The report has 16 key findings and 10 graphs (the graphs and associated data are available).  For example,

Women make up about half of 21- to 24-year-olds, but well over half (57.3 percent) of young college degree holders are women.

The report is worth reading and using in QL or data driven courses.

Thomas J. Pfaff is a Professor of Mathematics at Ithaca College. He created this website because he believes that sustainability, ranging from climate change to social justice, should be included in all courses whenever possible.
Previous What is the CEO to worker pay gap?
Next What is the Great Gatsby curve?