What happened to Iceberg A68 from Larsen C? 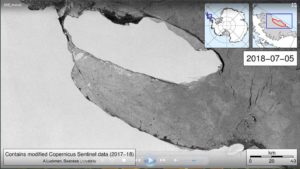 As can be seen in the satellite image animation, over the last year A-68 has not drifted far because of dense sea-ice cover in the Weddell Sea.

The iceberg has been pushed around by ocean currents, tides and winds, and its northern end has repeatedly been grounded in shallower water near Bawden Ice Rise. These groundings led eventually to further pieces of the iceberg being shattered off in May 2018.

The screen shot here is at the end of their image animation. Go to the report by MIDAS, Iceberg A68 one year on by Adrian Luckman, Martin O’Leary and Project MIDAS (7/9/18), and see the animation. Last post from sustainabiltiymath on Larsen C: Larsen C Update 7/5/17.

Thomas J. Pfaff is a Professor of Mathematics at Ithaca College. He created this website because he believes that sustainability, ranging from climate change to social justice, should be included in all courses whenever possible.
Previous What is the story of suicides in the U.S.?
Next How much does the U.S. spend on defense compared to NATO countries?

What is NASA’s Eyes on the Earth?