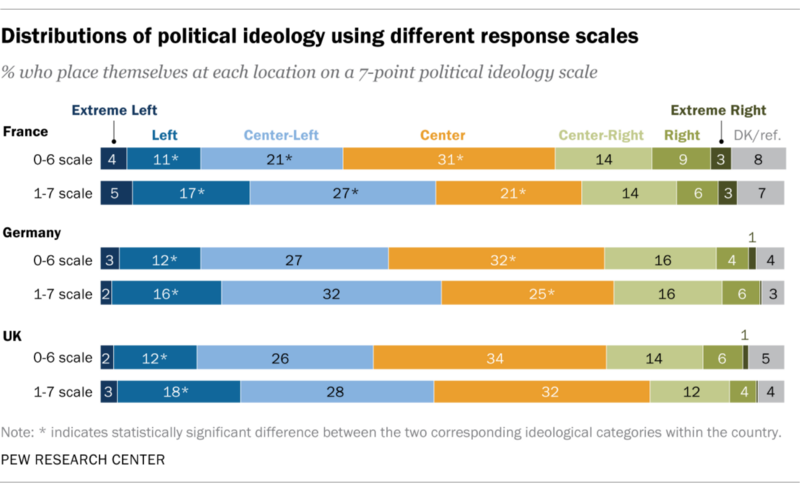 The Decoded/Pew Research Center article On a scale from 1 to 10, how much to the numbers really matter? by Jonathan Evans reports on their experiment using a 0 to 6 scale and 1 to 7 scale.

To carry it out, we randomly assigned respondents in France, Germany and the United Kingdom our political ideology question with one of two 7-point scales: either 0–6 or 1–7. The full question wording using our traditional 0–6 scale was this: “Some people talk about politics in terms of left, center and right. On a left-right scale from 0 to 6, with 0 indicating extreme left and 6 indicating extreme right, where would you place yourself?”

Their graph copied here shows the results of this study. An explanation:

These outcomes suggest that when a scale is easily divided in half — for example, when the maximum value is 6 rather than 7 — it’s more likely for respondents to select the midpoint. Previous research has found that respondents are likely to assume that half the top endpoint is a scale’s midpoint, so when half the top endpoint is not an answer option (e.g., 3.5 on the 1–7 scale), respondents seeking the central point on the scale may sometime choose 3 (not the scale midpoint) and sometimes choose 4 (the actual scale midpoint). Those who received the 0–6 scale could more easily find the midpoint (3) by halving the top endpoint.

The article has other charts and links to methodology.

Thomas J. Pfaff is a Professor of Mathematics at Ithaca College. He created this website because he believes that sustainability, ranging from climate change to social justice, should be included in all courses whenever possible.
Previous How do we humanize data?
Next How many ways does NASA use pi?