If you have been following this blog you might know that we are talking about Larsen C. Project MIDAS reports: Larsen C calves trillion ton iceberg. What does this mean?

The iceberg weighs more than a trillion tonnes (1,000,000,000,000 metric tonnes), but it was already floating before it calved away so has no immediate impact on sea level. The calving of this iceberg leaves the Larsen C Ice Shelf reduced in area by more than 12%, and the landscape of the Antarctic Peninsula changed forever.

Whilst this new iceberg will not immediately raise sea levels, if the shelf loses much more of its area, it could result in glaciers that flow off the land behind speeding up their passage towards the ocean. This non-floating ice would have an eventual impact on sea levels, but only at a very modest rate.

There is now some interesting modeling of where the iceberg will go and how long it will take to melt.  There should be a good differential equations project in here. Please read the full article, which includes a nice picture of the full break in the ice. Quiz question: What melting ice will have a significant impact on sea level? 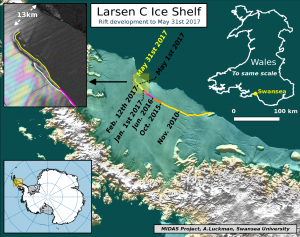 In the largest jump since January, the rift in the Larsen C Ice Shelf has grown an additional 17 km (11 miles) between May 25 and May 31 2017. This has moved the rift tip to within 13 km (8 miles) of breaking all the way through to the ice front, producing one of the largest ever recorded icebergs. The rift tip appears also to have turned significantly towards the ice front, indicating that the time of calving is probably very close.

STEM folks are presented with challenging problems modeling and predicting changes in ice and glaciers due to climate change.

Larsen C in the News

The crack in the 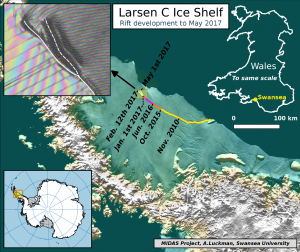 Larsen C ice shelf has been in the news recently. For instance Newsweek’s Another Huge Crack has Appeared on the Antarctica’s Larsen C Ice Shelf or the BBC’s The Crack that is Redrawing the World’s Map. Both articles seem to stem from the Project Midas news release A new branch of the rift on Larsen C (they made the map here).  The Newsweek article notes:

Current projections indicate that if the Larsen C ice shelf disintegrates, it could raise sea levels by up to 10cm.

Yet even if the whole ice shelf were to break up, Fricker said, the resulting sea level rise would be minimal. The glaciers held back by the shelf are not so imposing.

“The Larsen C ice shelf only holds back about one centimeter of global sea level rise,” she said.

Still, the crack in Larsen C could be a bellwether for ice shelves elsewhere on the continent, Rignot said.

“What we are seeing on Larsen C has implications for the big ice shelves farther south that hold considerable (sea level) potential,” he said. The loss of these larger ice shelves and the resulting acceleration of glacial calving could amount to meters of sea level rise in the decades and centuries to come.

The NASA article does provide some balance:

The crack could be the start of a period of sustained retreat, similar to what happened to Larsen B, said Ala Khazendar, a JPL scientist who has investigated both Larsen B and Larsen C. An increasingly weakened ice shelf allows glaciers to speed their flow into the ocean, and the shelf, unable to recover its former bulk and solidity, disintegrates.

Or, this could turn out to be a normal calving episode.

“We have no way yet of knowing whether Larsen C is doing what Larsen C has been doing for thousands of years, or whether we are witnessing the beginning of the end of Larsen C,” he said.

If you are talking about climate change in the classroom, the NASA article is excellent for further readings and discussion as well as the Project Midas site. There is some interesting science here in understanding ice.