How much do we trust our government?

When the National Election Study began asking about trust in government in 1958, about three-quarters of Americans trusted the federal government to do the right thing almost always or most of the time. Trust in government began eroding during the 1960s, amid the escalation of the Vietnam War, and the decline continued in the 1970s with the Watergate scandal and worsening economic struggles. Confidence in government recovered in the mid-1980s before falling again in the mid-1990s. But as the economy grew in the late 1990s, so too did confidence in government. Public trust reached a three-decade high shortly after the 9/11 terrorist attacks, but declined quickly thereafter. Since 2007, the shares saying they can trust the government always or most of the time has not surpassed 30%.

The one graph copied here also makes it obvious how opinions by political leaning shift on cue when a president of the other party is elected. Each graph in the article has a link to the data.

How big is the Dem/Rep perception gap? 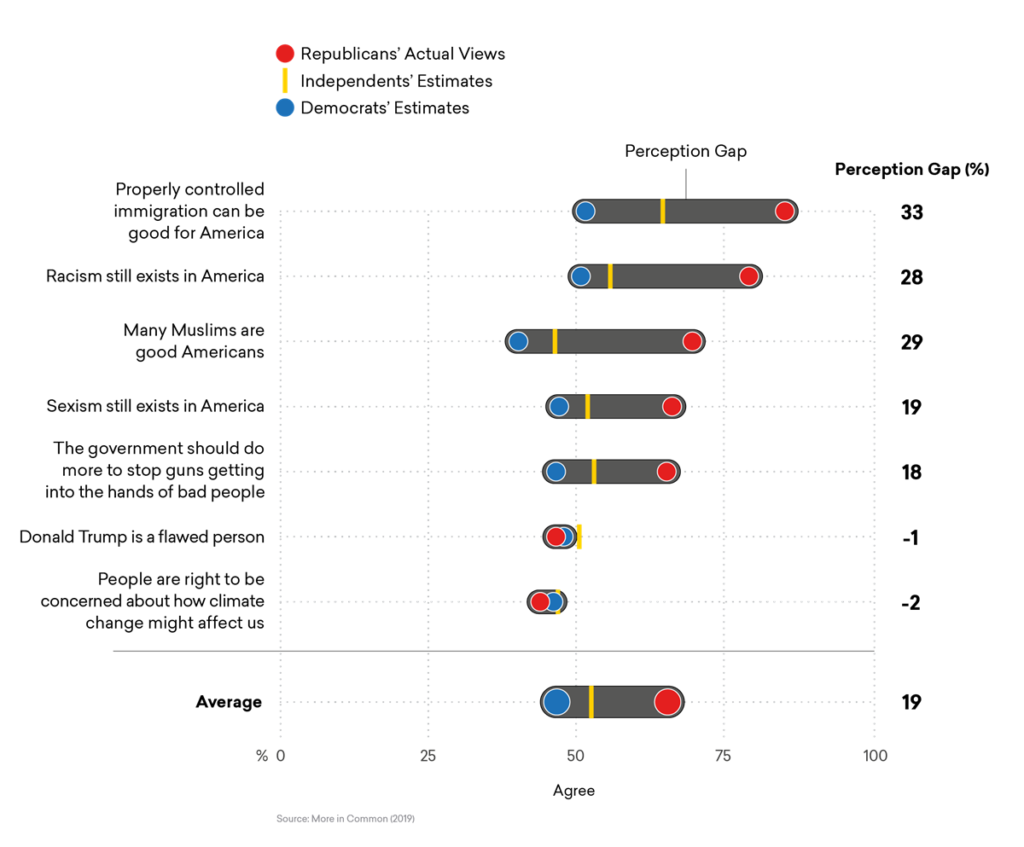 More in Common did a perception gap study in 2018 and while it is a few years old it is worth reading. The graph copied here is the Democrats’ Perception Gap and the page has a similar one for Republicans. One interesting paragraph:

Education is intended to make us better informed about the world, so we’d expect that the more educated you become, the more you understand what other Americans think. In fact, the more educated a person is, the worse their Perception Gap – with one critical exception. This trend only holds true for Democrats, not Republicans. In other words, while Republicans’ misperceptions of Democrats do not improve with higher levels of education, Democrats’ understanding of Republicans actually gets worse with every additional degree they earn. This effect is so strong that Democrats without a high school diploma are three times more accurate than those with a postgraduate degree.

The page has 11 graphs and would make a great QL source for discussion in a class. One key question to ask is if the gap has gotten better or worse over the last few years.