What percent of congress are immigrants or children of immigrants and what part of the country do they represent? 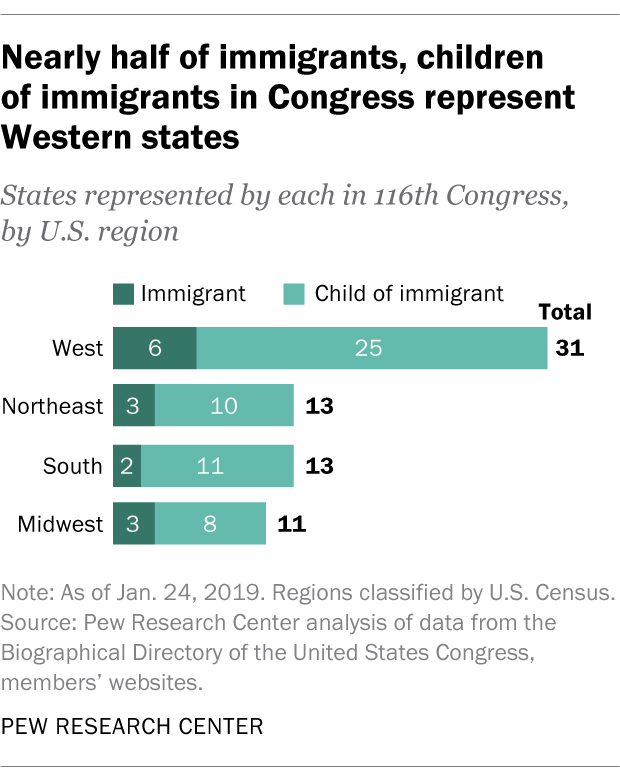 The PEW article In 116th Congress, at least 13% of lawmakers are immigrants or the children of immigrants by A.W. Geiger (1/24/19) provides an overview of the immigrant status of congress. The chart copied here show that the West has a greater number of immigrant or child of immigrant lawmaker.

While at least 13% of voting members in Congress are immigrants or children of immigrants, relatively few of these are foreign born: 13 in the House, and just one – Sen. Mazie Hirono, D-Hawaii – in the Senate. These 14 immigrant lawmakers represent just 3% of all voting members in both chambers, a slight uptick from recent Congresses but substantially below the foreign-born share of Congresses many decades ago. (For example, about 10% of members in the first and much smaller Congress of 1789-91 were foreign born. About a century later, in the 50th Congress of 1887-89, 8% of members were born abroad, according to a previous analysis.) The current share of foreign-born lawmakers in Congress is also far below the foreign-born share of the United States as a whole, which was 13.5% as of 2016.

The article includes a time series of the percent of foreign-born members in congress dating back to 1789. There is also a chart tracking were the immigrant or children of immigrant congress members are from.

Collectively, 74% of immigrants and children of immigrants in Congress have origins in countries in Europe, Latin America or Asia.

Much smaller shares claim heritage in countries in the Middle East, North America and sub-Saharan Africa – each below 10%.

Thomas J. Pfaff is a Professor of Mathematics at Ithaca College. He created this website because he believes that sustainability, ranging from climate change to social justice, should be included in all courses whenever possible.
Previous Rain, Rain, Go, Away. . .How wet has it been?
Next How hot was June 2019?