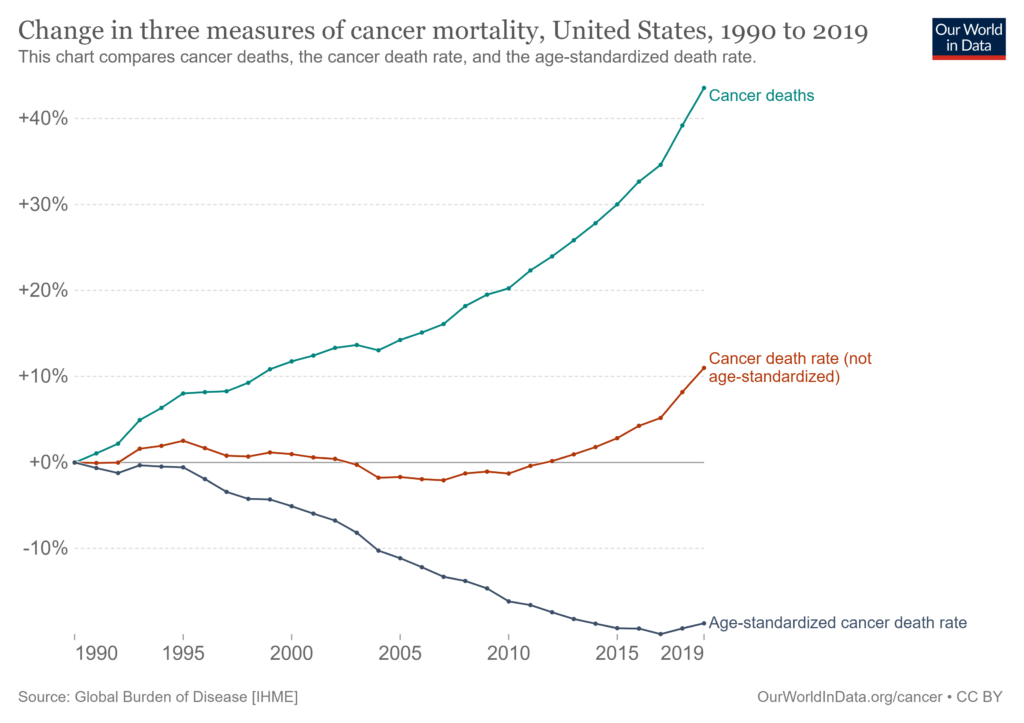 The graph here from Our Word in Data’s Cancer page  is a tutorial in quantitative literacy.  From 1990 to 2019 the total number of cancer death’s in the U.S. increases 43.5%. So, cancer deaths are up. But the overall population is growing so we need to normalize and we need to  look at the death rate, which increased only 11% over the same time period.  The death rate is an obvious metric, but still really not correct.

Cancer kills mostly older people – as the death rate by age shows, of those who are 70 years and older, 1% die from cancer every year. For people who are younger than 50, the cancer death rate is more than 40-times lower (more detail here).

We would therefore expect that many more people die from cancer in an old population than in a young population. Because health is improving and fertility rates are falling, the world is aging rapidly. This impacts the change over time that we are interested in: historically, fewer died from cancer because larger parts of the population died before they reached the age when cancer becomes a common cause of death.

Epidemiologists correct for changes in age-profile over time by relying on the so called ‘age-standardized death rate’. This metric tells us what the death rate would be if the age structure of the population had stayed the same over time and would be the same across countries.4

If we look at the age-standardized death rate we see a decline of 18.7% in cancer death rates. Knowing what metrics to view to understand trends is a critical quantitative literacy skill and necessary in understanding the world.

The data is available by clicking on download under the chart.

Thomas J. Pfaff is a Professor of Mathematics at Ithaca College. He created this website because he believes that sustainability, ranging from climate change to social justice, should be included in all courses whenever possible.
Previous How hot are the oceans?
Next How do vaccination rate differ?