How much has Lake Mead Dropped?

Lake Mead water levels continue to drop. At the end of May it was down to 1047.69 feet, which is a 13.8 foot drop since my post on April 25 with the end of March height. The west continues in drought according to the Drought Monitor.

What about electricity generation? From the Boulder City Review:

Hoover (Dam) would no longer be able to produce power at 950 feet of elevation,” she said. “We do not anticipate that happening.”

The graph here is from the data on the Lake Mead at Hoover Dam, End of Month Elevation (feet) page by the Bureau of Reclamation. The Sept Lake Mead post and the July Lake Mead post, which has a link to the R code for the graph.

Despite some drought relief out west (see U.S. Drought Monitor , still drought but generally less severe) Lake Mead has made little improvement. The graph here is from the data on the Lake Mead at Hoover Dam, End of Month Elevation (feet) page by the Bureau of Reclamation.

The team found that the record-low precipitation that kicked off the event could have been a fluke—just the rare bad luck of natural variability. But the drought would not have reached its current punishing intensity without the extremely high temperatures brought by human-caused global warming.

The cumulative precipitation for the 20-month period was the lowest on record, dating back to 1895. That left almost the entire western half of the contiguous United States in some level of drought at the end of August.

Meanwhile, the average temperatures over the same 20-month period were near-record high. High temperatures make the atmosphere thirsty for moisture, which it draws vigorously out of the region’s soil, rivers, lakes—even the snowpack. This atmospheric demand, called a vapor pressure deficit (“VPD” for short), reached record highs during the current drought.

No relief in site:

As for when the current event will break, the task force warns that it’s unlikely to be this winter. Thanks in part to the expectation that La Niña will settle into the tropical Pacific by later this fall, odds are that winter precipitation across the Southwest will be below average once again. That means the drought will likely persist well into 2022, and perhaps longer, depending on how unfavorable the coming wet season is.

There is a link to the full report for those interested.

What is the connection between wildfires and climate change? 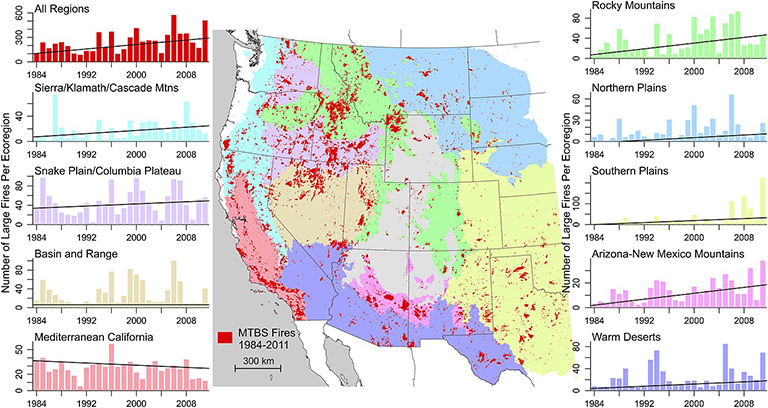 The NASA article The Climate Connections of a Record Fire Year in the U.S. West by Alan Buis (2/22/2021) provides a wildfire and climate summary. A few quotes:

“Climate affects how long, how hot and how dry fire seasons are,” she said. “As climate warms, we’re seeing a long-term drying and warming of both air and vegetation.”

Yet another factor driving changes in Western U.S. wildfires is a greater number of ignition sources, both natural and human-caused.

There are other graphs in the article and a link to the paper that produced the graph copied here.

Do you know what is going on in Cape Town? 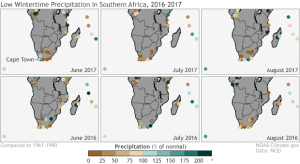 You can read about the drought on the Climate.gov post Day Zero approaches in Cape Town (Feb 7, 2018) by Michon Scott:

The exact date it will arrive depends on the latest calculations; as of February 6, 2018, Day Zero was projected to occur on May 11, 2018. That’s the day the taps might well be turned off for the roughly 4 million residents of South Africa’s second-largest city. Cape Town officials have blamed multiple factors in the water shortage, but one of the principal culprits is poor precipitation, and the problem has persisted since 2015.

The post includes interesting maps, such as the one here, and a link to Cape Town’s  water dashboard. The U.S. is also looking at wide spread drought which you can learn more about at United States Drought Monitor.