What is the pay gap between Hispanic women vs white non-Hispanic men? 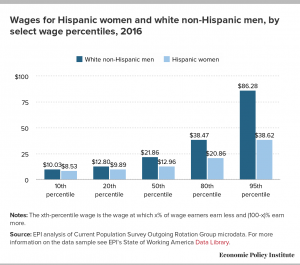 The Economic Policy Institute has the answer with their post Latina workers have to work 10 months into 2017 to be paid the same as white non-Hispanic men in 2016. They compare not only wages by percentile (graph here), but also compare by occupation and education.

Much of these differences are grounded in the presence of occupational segregation. Latina workers are far more likely to be found in certain low-wage professions than white men are (and less common in high-wage professions). But, even in professions with more Latina workers, they still are paid less on average than their white male colleagues.

As Hispanic women increase their educational attainment, their pay gap with white men actually increases. The largest dollar gap (more than $17 an hour), occurs for workers with more than a college degree.

The EPI post includes downloadable graphs (such as the one here) as well as the data.

Thomas J. Pfaff is a Professor of Mathematics at Ithaca College. He created this website because he believes that sustainability, ranging from climate change to social justice, should be included in all courses whenever possible.
Previous What is the connection between Greenland and the East Coast of the U.S.?
Next How much do you know about the production and consumption of protein?