Home / Uncategorized / Do we disagree with factual statements that we think are opinions?

Do we disagree with factual statements that we think are opinions? 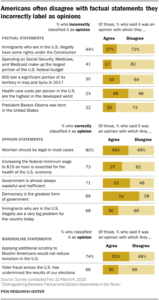 The Pew Research Center’s article Distinguishing Between Factual and Opinion Statements in the News by Amy Mitchell, Jeffrey Gottfried, Michael Barthel, and Nami Sumida (6/18/18) addresses this question and more.

A new Pew Research Center survey of 5,035 U.S. adults examines a basic step in that process: whether members of the public can recognize news as factual – something that’s capable of being proved or disproved by objective evidence – or as an opinion that reflects the beliefs and values of whoever expressed it.

We will focus on section 4 Americans overwhelmingly see statements they think are factual as accurate, mostly disagree with factual statements they incorrectly label as opinions. Odds are that a person who identifies a factual statement as opinion will also disagree with the statement (see table copied here).  For example,  41% of those surveyed said that Spending on Social Security, Medicare, and Medicaid make up the largest portion of the U.S. federal budget was an opinion and of those 82% disagreed with the statement.

This is an excellent article for a QL or Stats course as it is rich with data, graphs, and charts. You can also discuss why 41% of those surveyed thought a statement that is measurable (How much of the Federal budget goes to social security, medicare, and medicaid?) was an opinion.  The article also includes detailed information on their methodology and detailed tables of data.

Thomas J. Pfaff is a Professor of Mathematics at Ithaca College. He created this website because he believes that sustainability, ranging from climate change to social justice, should be included in all courses whenever possible.
Previous How much are 30 year temperature averages increasing?
Next How hot has it been this week?