What is the pay gap between black women and white men? 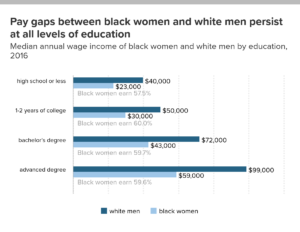 EPI has the answer in the post Separate is still unequal: How patterns of occupational segregation impact pay for black women by Madison Matthews and Valerie Wilson (8/6/2018).

On average, in 2017, black women workers were paid only 66 cents on the dollar relative to non-Hispanic white men, even after controlling for education, years of experience, and geographic location. A previous blog post dispels many of the myths behind why this pay gap exists, including the idea that the gap would be closed by black women getting more education or choosing higher paying jobs. In fact, black women earn less than white men at every level of education and even when they work in the same occupation. But even if changing jobs were an effective way to close the pay gap black women face—and it isn’t—more than half would need to change jobs in order to achieve occupational equity.

Along with the graph copied here, there is a time series from 2000 to 2016 of the Duncan Segregation Index:

Data is available for both graphs.

Thomas J. Pfaff is a Professor of Mathematics at Ithaca College. He created this website because he believes that sustainability, ranging from climate change to social justice, should be included in all courses whenever possible.
Previous What percent of doctors are female?
Next How has Arctic sea ice volume changed?