What is known about world income inequality? 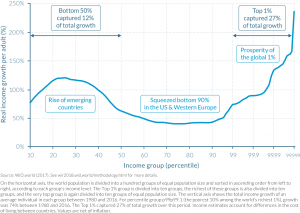 The World Inequality Report 2018 provides a complete summary of world income inequality.  The executive summary contains thirteen charts to explore such as the one here.

The poorest half of the global population has seen its income grow significantly thanks to high growth in Asia (particularly in China and India). However, because of high and rising inequality within countries, the top 1% richest individuals in the world captured twice as much growth as the bottom 50% individuals since 1980 (Figure E4). Income growth has been sluggish or even zero for individuals with incomes between the global bottom 50% and top 1% groups. This includes all North American and European lower- and middle-income groups.

Research has demonstrated that tax progressivity is an effective tool to combat inequality. Progressive tax rates do not only reduce post-tax inequality, they also diminish pre-tax inequality by giving top earners less incentive to capture higher shares of growth via aggressive bargaining for pay rises and wealth accumulation. Tax progressivity was sharply reduced in rich and some emerging countries from the 1970s to the mid-2000s. Since the global financial crisis of 2008, the downward trend has leveled off and even reversed in certain countries, but future evolutions remain uncertain and will depend on democratic deliberations. It is also worth noting that inheritance taxes are nonexistent or near zero in high-inequality emerging countries, leaving space for important tax reforms in these countries.

The methodology page includes files with all the data.

Thomas J. Pfaff is a Professor of Mathematics at Ithaca College. He created this website because he believes that sustainability, ranging from climate change to social justice, should be included in all courses whenever possible.
Previous How do NYC securities employee bonuses compare to U.S. household income?
Next Are teachers being paid fairly?