What economic impacts does some college education have on men? 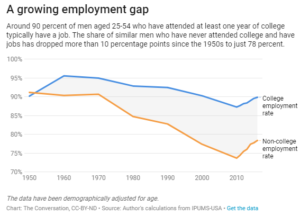 The article in the Conversation 22 percent of men without college don’t have jobs. Here’s why they’re being left behind. by Erin Wolcott (6/7/2018) makes two points:

But the unemployment rate doesn’t tell the full story because it only includes people actively looking for work. People who report not having looked for work in the previous four weeks are completely left out of this number. The employment rate, which is the share who are actually employed, captures the full picture.

And the numbers are stark. Back in the 1950s, there was no education-based gap in employment. About 90 percent of men aged 25-54 – regardless of whether they went to college – were employed.

The Great Recession was particularly painful for men without any college. By 2010, only 74 percent had a job, compared with 87 percent of those with a year or more of college.

The gap extends to the wages of those who actually had jobs as well. As recently as 1980, real hourly wages for the two groups were nearly identical at about US$13. In 2015, men with at least a little college saw their wages soar 65 percent to over $22 an hour. Meanwhile, pay for those who never attended plunged by almost half to less than $8.

The article has another graph for wages. Both graphs are interactive and contain links to download the data. Read the article.

Thomas J. Pfaff is a Professor of Mathematics at Ithaca College. He created this website because he believes that sustainability, ranging from climate change to social justice, should be included in all courses whenever possible.
Previous How fast is Antarctica melting (and a quick calculus project)?
Next How has forest area changed around the world?