How many people are there and how many can the earth support? 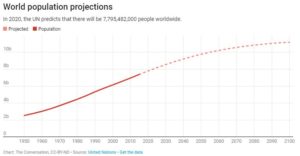 The article in The Conversation 7.5 billion and counting: How many humans can the Earth support? by Andrew D. Hwang (7/9/18) provides some details.  The graph here, copied from the article provides population number and future estimates.

On the other hand, world numbers are projected to reach 8 billion around 2023, a doubling time of 49 years, and barring the unforeseen, expected to level off around 10 to 12 billion by 2100.

The article provides a link to download the data and discusses key points related to inequality. For example,

Wealthy countries consume out of proportion to their populations. As a fiscal analogy, we live as if our savings account balance were steady income.

According to the Worldwatch Institute, an environmental think tank, the Earth has 1.9 hectares of land per person for growing food and textiles for clothing, supplying wood and absorbing waste. The average American uses about 9.7 hectares.

These data alone suggest the Earth can support at most one-fifth of the present population, 1.5 billion people, at an American standard of living.

This article is useful for QL and Stats classes, as well as anyone that would like to use population data and/or discuss carrying capacity.

Thomas J. Pfaff is a Professor of Mathematics at Ithaca College. He created this website because he believes that sustainability, ranging from climate change to social justice, should be included in all courses whenever possible.
Previous What are the prospects for high school grads?
Next What are the recent Mauna Loa CO2 measurements?