How big will the Gulf of Mexico hypoxic zone be this year? 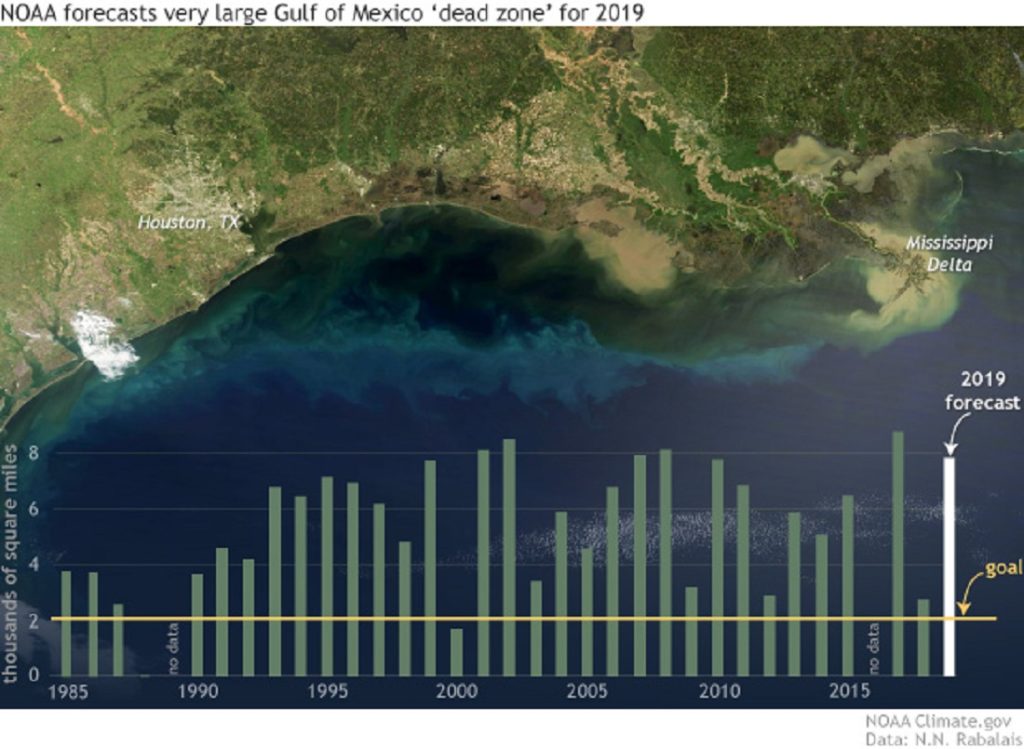 Climate.gov reports on the prediction by NOAA for the Gulf of Mexico hypoxic zone in the artcle Wet spring linked to forecast for big Gulf of Mexico ‘dead zone’ this summer by Rebecca Lindsey (6/18/19).

Last week, NOAA issued its annual forecast, saying that the summer dead zone—an area near the sea floor where there is little or no dissolved oxygen—may be just shy of 8,000 square miles in 2019, nearly as large as the record-setting area that occurred in 2017. The ecological impacts of the Gulf dead zone spread through the economy.

The hypoxic or ‘dead’ zone:

This spring surge in runoff feeds an overgrowth of algae and other plant-like microbes (phytoplankton) that live in the coastal waters. The algae eventually die and sink to deeper layers of the Gulf, where they are decomposed by bacteria. Like human breathing, decomposition uses up oxygen. Under the right conditions, the bottom waters become severely depleted in oxygen, suffocating fish and other marine life that can’t escape.

Sediment cores dug up from the ocean floor indicate that a large, yearly dead zone is not a natural phenomenon in the Gulf of Mexico. Microfossils in the sediment layers from the years 1700-1900 include species that cannot tolerate hypoxic (low oxygen) waters, which is a good sign that oxygen stress wasn’t a widespread problem before the twentieth century.

The article has other interesting maps but doesn’t provide the data in the graph. The data might be acquired with an email to LUMCON.  The original NOAA post, NOAA forecasts very large ‘dead zone’ for Gulf of Mexico (6/12/19) has links to their water monitoring stations.

Thomas J. Pfaff is a Professor of Mathematics at Ithaca College. He created this website because he believes that sustainability, ranging from climate change to social justice, should be included in all courses whenever possible.
Previous Are hurricanes lingering near the coast longer?
Next How do we keep track of Greenland surface melt extent? 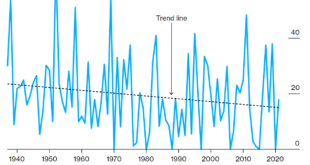