Are hurricanes lingering near the coast longer? 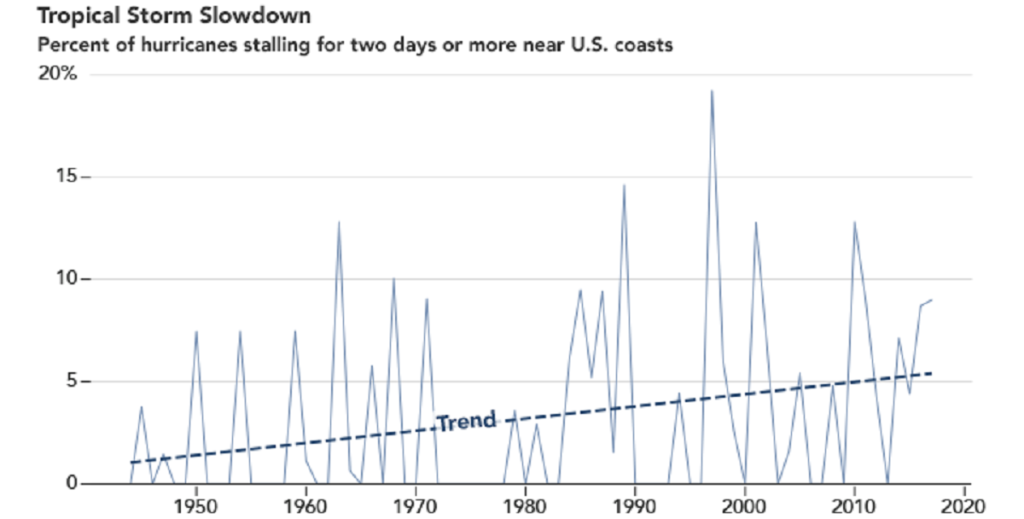 In a study published on June 3, 2019, scientists from NASA and the National Oceanic and Atmospheric Administration (NOAA) showed that North Atlantic hurricanes have been moving slower and meandering more from their average trajectory over the past seven decades. The result has been storms that stall more frequently and linger for longer periods of time near the coast, leading to more rainfall over confined locations.

“There is some evidence that those large-scale wind patterns are slowing down in the tropics, where Atlantic storms usually start,” said Hall. “The storms are not being pushed as hard by the current that moves them along. That’s a climate change signal.”

One projected effect of climate change is that air masses will move more slowly around the world. As global temperatures rise, the Arctic is warming faster than the tropics—a phenomenon called Arctic amplification. As temperature differences between the tropics and high latitudes decrease over time, so will the difference in air pressure, leading to a reduction in winds.

The study linked to in the first quote has links to data and that study may be useful as classroom material.

Thomas J. Pfaff is a Professor of Mathematics at Ithaca College. He created this website because he believes that sustainability, ranging from climate change to social justice, should be included in all courses whenever possible.
Previous What are the economic prospect for 2019 high school grads?
Next How big will the Gulf of Mexico hypoxic zone be this year?

About two months ago I had the post How low is Lake Mead?  The graph …