After an unusually cool summer, Greenland experienced record-breaking temperatures for September at multiple stations along the west coast, making for an exceptionally warm September. In Paamiut and Qaqortoq, this month’s average temperature exceeded any of the three previous summer temperature averages.

Times series data is available on the page. 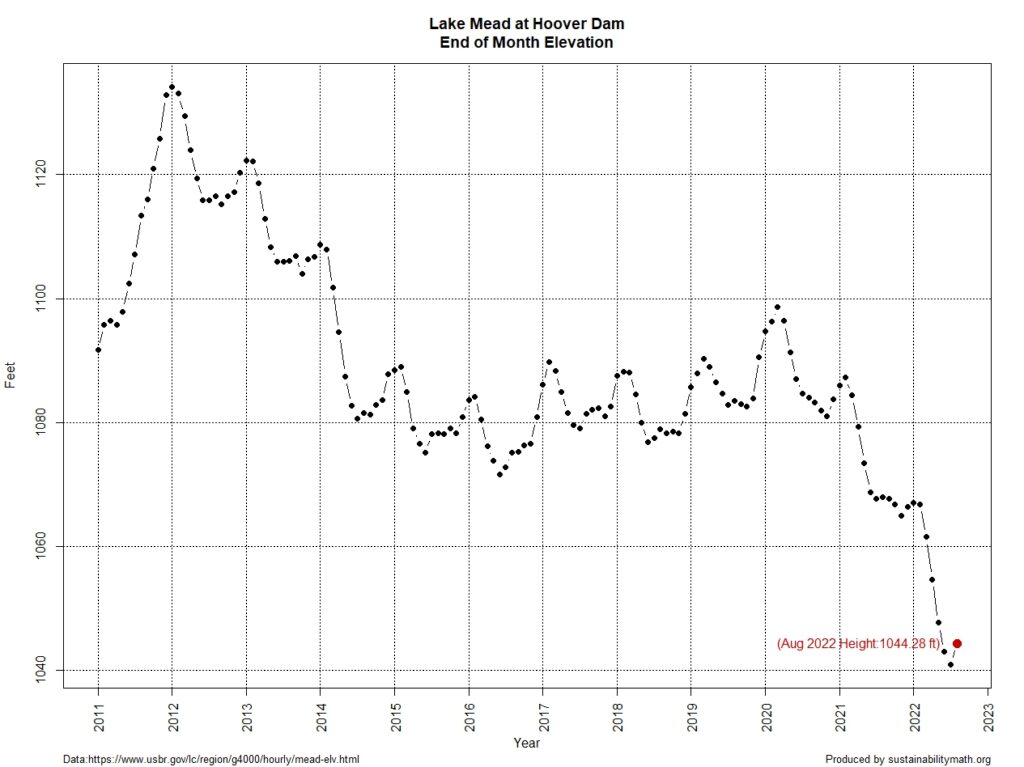 Lake Mead saw a slight uptick in August after hitting a new low again in July. The graph clearly shows that the wet season, if we can call it that, is roughly November through March. Unfortunately a good year doesn’t even get 20 feet dating back to 2012. Lake Mead needs a 2011 year. I’ll check back in a few months. Data is from the Lower Colorado River Operation.  R code from the graph is linked on my July 2021 Lake Mead post.

The August 2022 global surface temperature departure was the sixth highest for August in the 143-year record at 0.90°C (1.62°F) above the 20th century average of 15.6°C (60.1°F). The ten warmest Augusts on record have all occurred since 2009. August 2022 also marked the 46th consecutive August and the 452nd consecutive month with temperatures, at least nominally, above the 20th century average.

Spain had its second-warmest August on record after August 2003.

The Royal Meteorological Institute confirmed that Belgium had its warmest August since records began in 1833.

The July 2022 global surface temperature departure was the sixth highest for July in the 143-year record at 0.87°C (1.57°F) above the 20th century average of 15.8°C (60.4°F). The five warmest Julys on record have all occurred since 2016. July 2022 also marked the 46th consecutive July and the 451st consecutive month with temperatures, at least nominally, above the 20th century average.

Most of the contiguous U.S. had warmer-than-average temperatures in July, with several areas experiencing record-warm temperatures this month. July 2022 was the third-warmest July on record for the U.S.

Portugal had its warmest July on record, according to the Portuguese weather service. A station in Pinhão recorded a temperature of 47.0°C (116.6°F) on July 14, setting a new record for the warmest day in July for the country.

Spain had its warmest July on record, as well as its warmest month on record since at least 1961. 29 major weather stations had an average July temperature that was the highest of any month since the beginning of the record in 1961.

Time series data is available at a link near the top of the page. 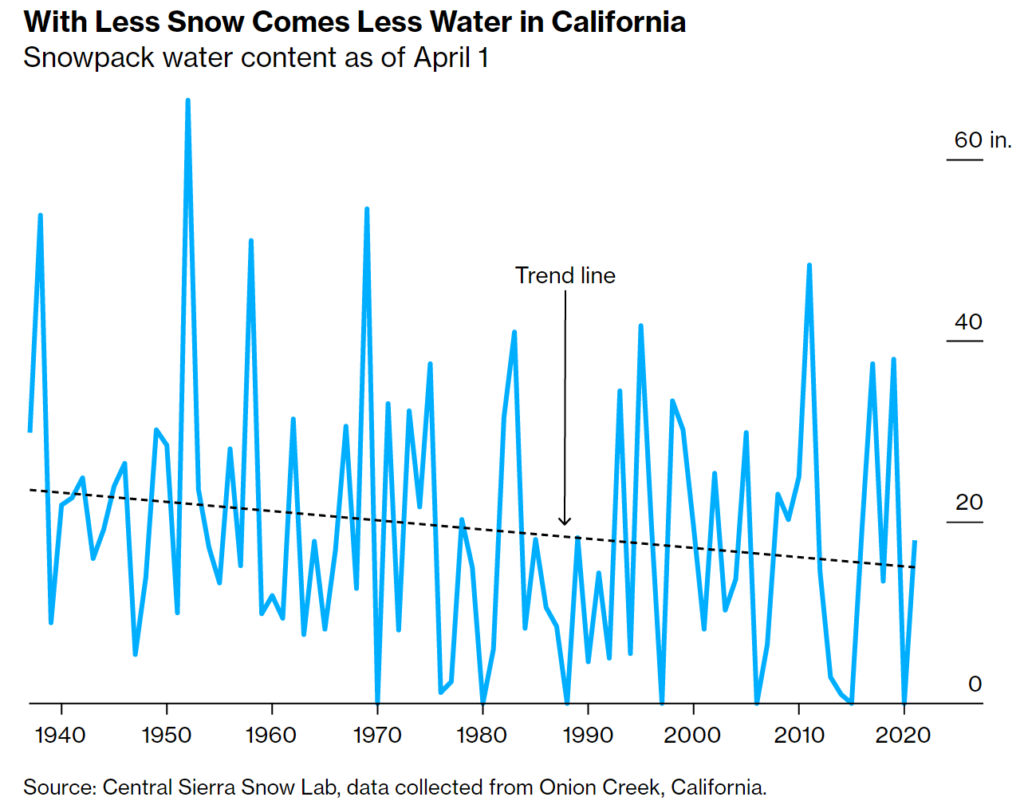 The Bloomberg article The End of Snow Threatens to Upend 76 Million American Lives by Baker et. el. (8/3/2022) has some excellent graphs, such as the one copied here, and overview of the water issues in the west.

The West’s mountain snowpacks have shrunk, on average, 23% between 1955 and 2022. By the end of the 21st century, California could lose as much as 79% of its peak snowpack by water volume.

This impacts all of the US:

The California Rice Commission says only about half of the 500,000 acres of rice typically planted in the state will be grown this year.

California alone accounts for a third of all vegetables grown in the US and two-thirds of the nation’s fruits and nuts.

The article includes a map of CA with charts of current reservoir levels as well as a couple of then and now photos. The data seems to come from the California Data Exchange Center.

How much has your country warmed? 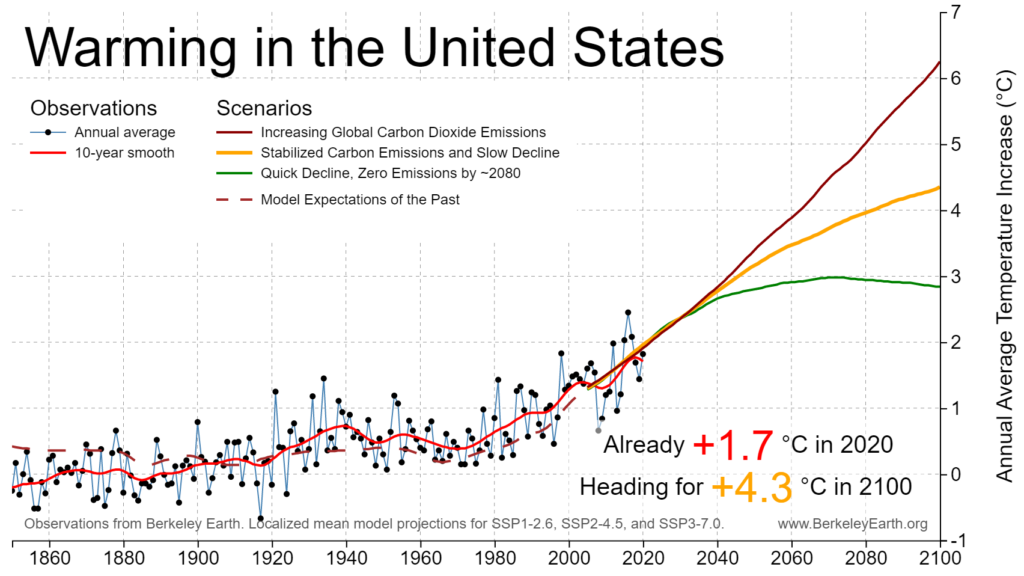 The Berkeley Earth page Actionable Climate Science for Policymakers has a Country-Level Warming Projections interactive graphic. Select a country and a graph, such as the one here for the U.S. appears. Click on the button below the graph,  View More Details, and you will get extra text information and links to download the graph and the data.

The global surface temperature for June 2022 was the sixth-highest in the 143-year record at 0.87°C (1.57°F) above the 20th century average. This month was also 0.08°C (0.14°F) cooler than the warmest June on record set in 2019. The ten warmest Junes have all occurred since 2010. June 2022 also marked the 46th consecutive June and the 450th consecutive month with temperatures, at least nominally, above the 20th-century average.

Data available at the top of the page.

What are Earth Minute Videos?

NASA isn’t all about interplanetary exploration; in fact, the agency spends much of its time studying our home planet. This fun whiteboard animation series explains Earth science to the science-curious.

The videos themselves don’t have much math but each video has a link underneath to more info. For example, the Greenland video here includes a link to Ice Sheets info which has data.

The April 2022 global surface temperature was 0.85°C (1.53°F) above the 20th century average and tied with 2010 as the fifth highest for April in the 143-year record. The 10 warmest April months have occurred since 2010, with the years 2014–2022 all ranking among the 10 warmest Aprils on record. This marked the 46th consecutive April and the 448th consecutive month with temperatures, at least nominally, above the 20th century average.

Time series data available at a link at the top of the page.

Are there more hurricanes due to climate change? 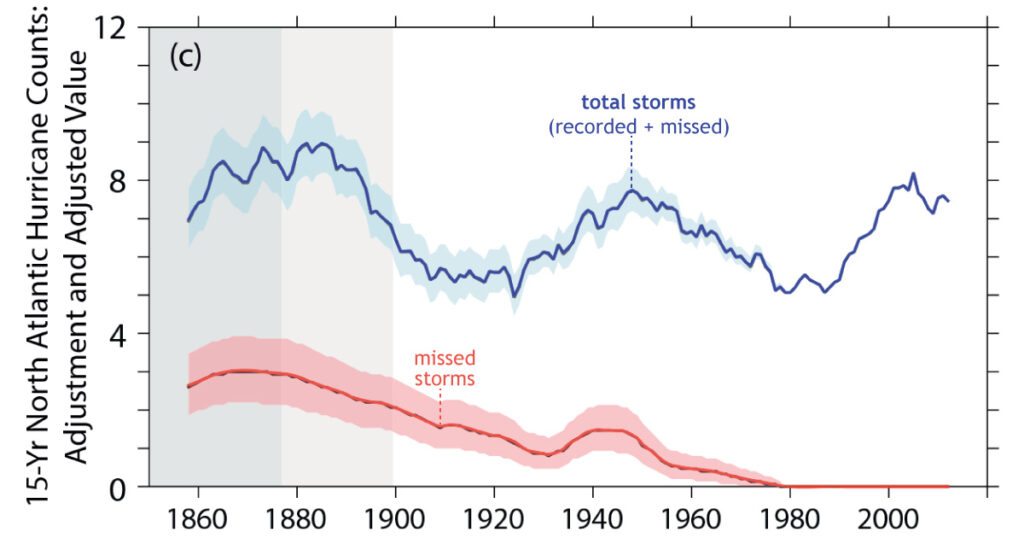 The climate.gov article Can we detect a change in Atlantic hurricanes today due to human-caused climate change? by Chris Landsea and Tom Knutson (5/11/2022) is a great example of the challenges in understanding complex systems. If all you want is the answer:

Atlantic hurricanes display distinct busy and quiet periods:  Busy hurricane decades occurred in the late 19th century, mid-20th century, and from the mid-1990s onward, but quieter decades in the early 20th century and in the 1970s to early-1990s.

These multi-decadal variations in Atlantic tropical storms and hurricanes have been linked to a phenomenon called the Atlantic Multidecadal Variability, which may be primarily natural internal variability or aerosol-driven.

A detectable greenhouse gas-induced influence on observed Atlantic tropical storm and hurricane behavior to date is difficult to identify because of the 50-80 year variability in hurricane activity.

The bottom-line answer to the question in the title is: No, we cannot confidently detect a trend today in observed Atlantic hurricane activity due to man-made (greenhouse gas-driven) climate change. Some human influence may be present though still below the threshold for confident detection.

However, in a 2019 tropical cyclone-climate change assessment, the majority of authors concluded that the recent hurricane activity increases mentioned above did not qualify as a detectable man-made influences (meaning clearly distinguishable from natural variability). Another hurricane metric, the fraction of rapidly intensifying Atlantic hurricanes, was reported to have increased since around 1980 (Bhatia et al. 2019), and they found that this change was highly unusual compared with simulated natural variability from a climate model, while being consistent in sign with the expected change from human-caused forcing. Even so, however, their confidence was limited by uncertainty in how well the single climate model used was representing real-world natural variability in the Atlantic region.