What is the Indo-Pacific warm pool? 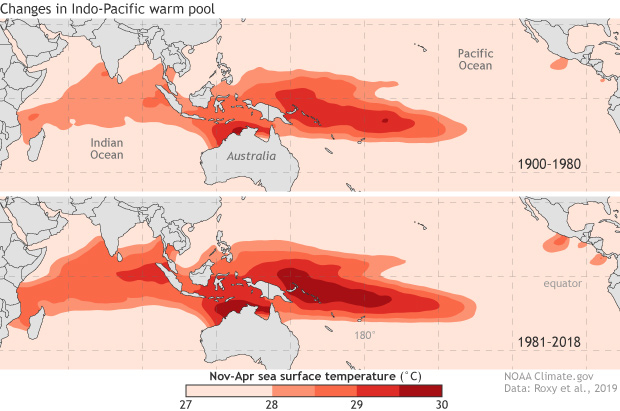 Due to human-caused climate change, our planet’s ocean has been heating up at a rate of 0.06 degrees C (0.11 degrees F) per decade over the past century. But this warming isn’t uniform. In fact, recent NOAA-funded research shows that a large pool of the ocean’s warmest waters,  stretching across the Indian and west Pacific Oceans, has grown warmer and almost doubled in size since 1900. This expanding warm pool not only impacts ocean life; according to the study, it is driving changes in the Madden Julian Oscillation (MJO), a key weather and climate pattern, and in regional rainfall around the globe.

Here is how it works:

The warming is uneven across the region, with greater warming in the west Pacific. This unevenness creates a temperature contrast that enhances cloud-forming winds, moisture, and energy over the region, and it draws in warm moist air from the Indian Ocean. The uneven expansion of the Warm Pool has warped the MJO—a global pattern of clouds, wind, rain and pressure, active in the winter, that starts over the Indian Ocean and travels eastward around the tropics in 30-60 days. Though the total lifespan of its global trek has stayed the same, the study finds that the MJO’s clouds and rain now spend 3-4 fewer days over the Indian Ocean and 5-6 more days over the Maritime Continent and west Pacific, fueled by heat and moisture where the warming is greater.

The first link in the quote above is to global ocean temperature data.

Thomas J. Pfaff is a Professor of Mathematics at Ithaca College. He created this website because he believes that sustainability, ranging from climate change to social justice, should be included in all courses whenever possible.
Previous How many people live in poverty?
Next How are the top 0.1% doing?