Are we done with snow for the year? 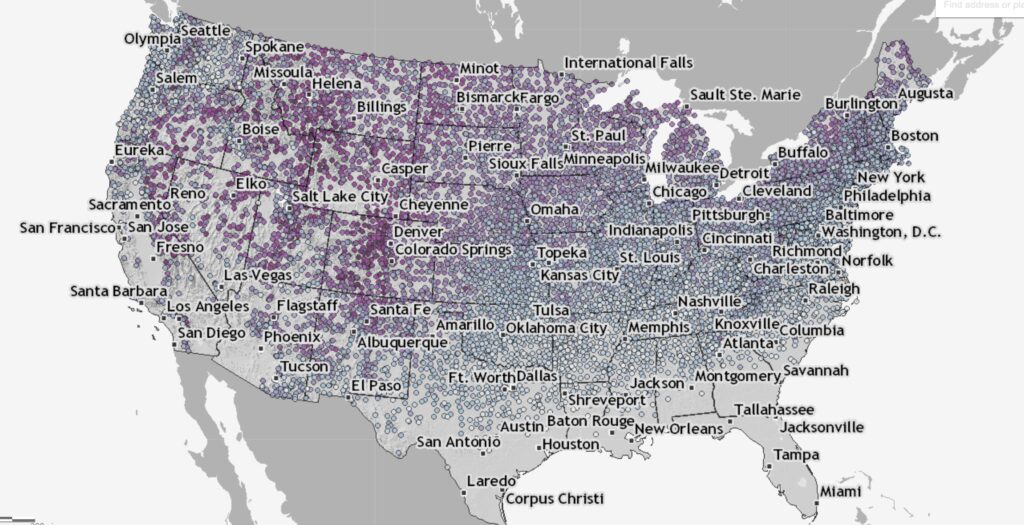 If you check the Climate.gov page Interactive map: Latest snow on record for thousands of U.S. weather stations by Tom Di Liberto (updated 3/30/2022) you can find the date of the last snowfall on record at a weather station near you. On the map:

This interactive map shows the latest day for which measurable snow (accumulations of greater than 0.1 inches) was recorded for thousands of U.S. weather stations during their period of operation (up through April 11, 2018.) Purple colors reflect latest-snowfall dates that occurred later in the year, while bluer shades reflect earlier dates for the last snow of the year.

On one of the patterns in the map:

The interesting wrinkle is that the change in date of the latest final snow of the season does not follow a strictly east to west line across the country, even to the east of the Rockies, as it would if latitude were the only influence. Instead, it appears to occur on a diagonal across the Great Plains and into the Midwest. Why is that? Well the answer lies both to the south (the Gulf of Mexico) and the north (Canada).

As the calendar moves into spring, warmer air from closer to tropics and over the Gulf of Mexico begins to moderate temperatures enough over the southeast to make it difficult for temperatures to be cold enough for snow. Meanwhile, cold air that resides in the interior of Canada can still funnel south, bounded on one side by the Rocky Mountains, allowing for the occasional late spring snowfall, even as far south as higher elevations in New Mexico.

There are no direct data sources but the map is interesting.

Thomas J. Pfaff is a Professor of Mathematics at Ithaca College. He created this website because he believes that sustainability, ranging from climate change to social justice, should be included in all courses whenever possible.
Previous What are the most important community issues for Black Americans?
Next What is the status of Lake Mead?