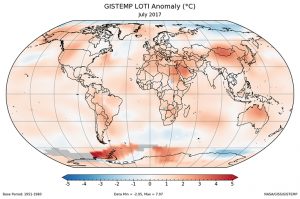 The headline from NASA’s Goddard Institute for Space Studies says almost all you need to know, July 2017 equaled record July 2016.

July 2017 was statistically tied with July 2016 as the warmest July in the 137 years of modern record-keeping, according to a monthly analysis of global temperatures by scientists at NASA’s Goddard Institute for Space Studies (GISS) in New York.

Last month (July) was about 0.83 degrees Celsius warmer than the mean July temperature of the 1951-1980 period. Only July 2016 showed a similarly high temperature (0.82 °C), all previous months of July were more than a tenth of a degree cooler.

But, the subtitle of NASA shocker: Last month was hottest July, and hottest month, on record says more

It’s the first time we’ve seen such a record month in the absence of an El Niño boost.

In other words, we are setting records without the help of El Niño.  The map here, which you can create here, is interesting because the distribution of temperature anomalies is rather uniform (use in a stats class).  You can get the data for the graph below from NOAA’s Climate at a Glance. 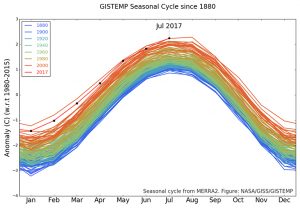 Thomas J. Pfaff is a Professor of Mathematics at Ithaca College. He created this website because he believes that sustainability, ranging from climate change to social justice, should be included in all courses whenever possible.
Previous Climate Literacy Resource for Educators and Others
Next NOAA State Temperature Trend Charts