What would minimum wage be if it grew with productivity? 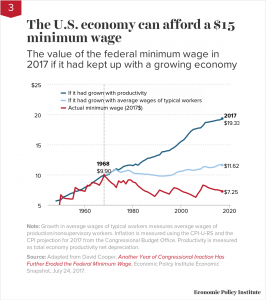 The expectation that the minimum wage rise in step with broader trends in the economy would not have been unreasonable for previous generations—that was the trend throughout the 1950s and 1960s. Today’s minimum wage workers have been harmed both by the failure to raise the minimum wage in step with pay for typical workers and by the huge and growing gap between these nonsupervisory wages and economy-wide productivity. The Raise the Wage Act of 2017 would raise the federal minimum wage to $15 by 2024. Such a raise would certainly bring the pay of minimum wage workers closer to providing a decent quality of life, even though it would still fall short of what the economy could have delivered for low-wage workers over the past 50 years.

All twelve of EPI’s Top Charts of 2017 include data and you can download the chart.

Thomas J. Pfaff is a Professor of Mathematics at Ithaca College. He created this website because he believes that sustainability, ranging from climate change to social justice, should be included in all courses whenever possible.
Previous Is there a wealth gap due to discrimination?
Next How hot was the U.S. in 2017?