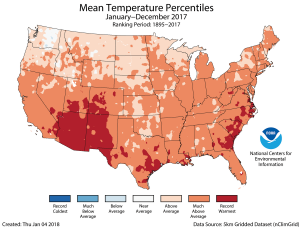 According to NOAA’s article, Assessing the U.S. Climate in 2017, it was the third hottest year on record for the U.S. It also wasn’t an El Nino year. In summary,

For the third consecutive year, every state across the contiguous U.S. and Alaska had an above-average annual temperature. Despite cold seasons in various regions throughout the year, above-average temperatures, often record breaking, during other parts of the year more than offset any seasonal cool conditions.

The article has other useful graphs and information, including a summary for December.  Related data is linked to their Climatological Rankings page.

Thomas J. Pfaff is a Professor of Mathematics at Ithaca College. He created this website because he believes that sustainability, ranging from climate change to social justice, should be included in all courses whenever possible.
Previous What would minimum wage be if it grew with productivity?
Next What do you know about the top 1%?