How much are we working?

Our World in Data has your answer with the article 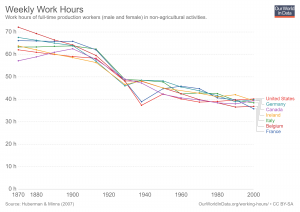 The researchers Michael Huberman and Chris Minns published estimates of weekly work hours going back to the late 19th century. This data – shown in the following visualization – shows that over this time working hours have steeply declined. Full-time workers in these countries work 20 or even 30 hours less every week than in the 19th century.

As always with Our World in Data, they have interactive graphs that can be downloaded (such as the one here – you also have choices of countries) along with the data set. The article has a total of six interactive graphs and data related to work, productivity,  income, and gender.

Thomas J. Pfaff is a Professor of Mathematics at Ithaca College. He created this website because he believes that sustainability, ranging from climate change to social justice, should be included in all courses whenever possible.
Previous What are the differences in infant mortality by race?
Next Housekeeping