Why should we care about insects? 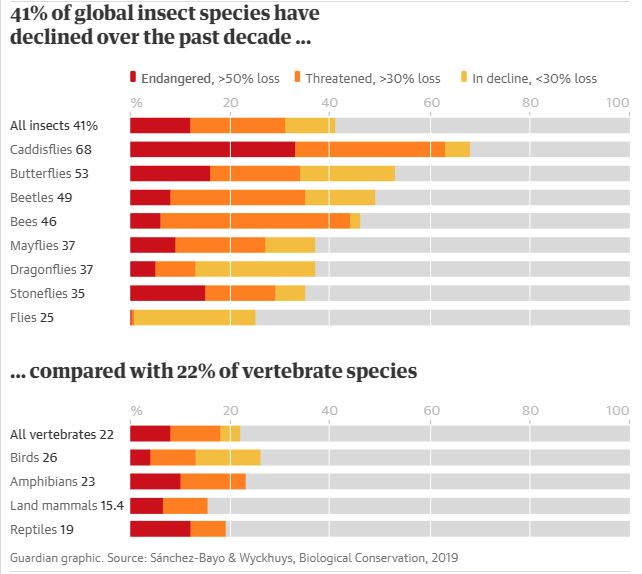 The Guardian article, Plummeting insect numbers ‘threaten collapse of nature’ by Damian Carrington (2/10/19) reports on the recent Biological Conservation paper Worldwide decline of the entomofauna: A review of its drivers by Francisco Sánchez-Bayo and Kris A.G.Wyckhuys (1/20/19).

More than 40% of insect species are declining and a third are endangered, the analysis found. The rate of extinction is eight times faster than that of mammals, birds and reptiles. The total mass of insects is falling by a precipitous 2.5% a year, according to the best data available, suggesting they could vanish within a century.

(Note percentage rate of change in the quote.) Why?

The analysis, published in the journal Biological Conservation, says intensive agriculture is the main driver of the declines, particularly the heavy use of pesticides. Urbanization and climate change are also significant factors.

One of the biggest impacts of insect loss is on the many birds, reptiles, amphibians and fish that eat insects. “If this food source is taken away, all these animals starve to death,” he said. Such cascading effects have already been seen in Puerto Rico, where a recent study revealed a 98% fall in ground insects over 35 years.

“If insect species losses cannot be halted, this will have catastrophic consequences for both the planet’s ecosystems and for the survival of mankind,” said Francisco Sánchez-Bayo

The Guardian article is a good QL resource. The paper has nice graphs and data but is behind a paywall.

Thomas J. Pfaff is a Professor of Mathematics at Ithaca College. He created this website because he believes that sustainability, ranging from climate change to social justice, should be included in all courses whenever possible.
Previous How warm was 2018?
Next What is the peak quarter for utility revenues?