Why is Black maternal mortality higher? 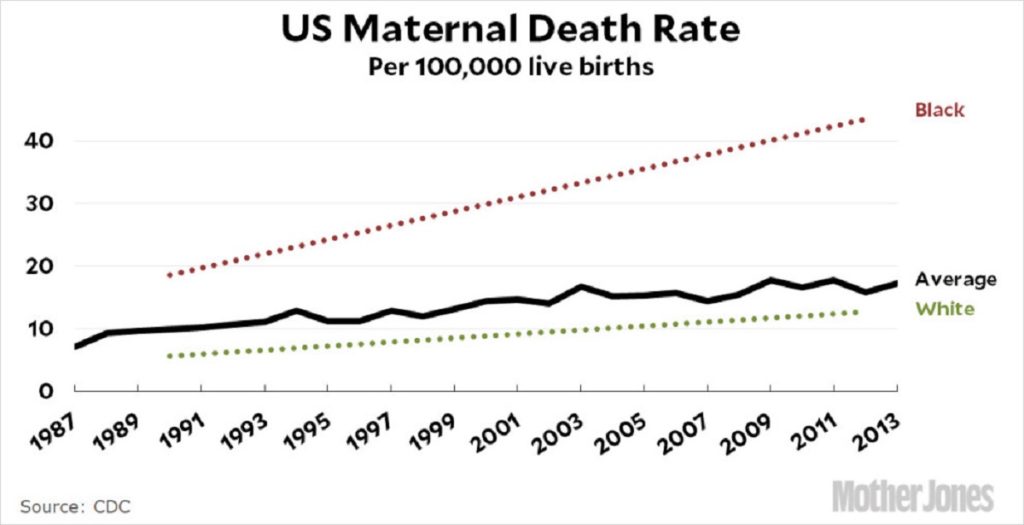 Kevin Drum provides an excellent example of quantitative reasoning in his (5/6/19) post How Can We Reduce Black Maternal Mortality? The story begins with his chart here that shows maternal mortality increasing in general, but it has increased faster and is much higher for Black mothers as compared to White. Drum begins by addressing the toxic stress hypothesis, in other words, the differences are do to the stress caused by societal and systemic racism which leads to physiological issues.  But,

One reason for this is the “Hispanic paradox”: Hispanics certainly encounter systemic racism too, but the maternal mortality rate for Hispanic mothers is about the same as for white mothers.

The article has a graph of “allostatic load” which looks to quantify long-term stress.

The differences in allostatic load are tiny—about the equivalent of one IQ point on an intelligence test—and Hispanics have a higher allostatic load than either blacks or whites but the lowest maternal mortality rate.

Another chart looks at self-reported stress by race for poor individuals, but

Poor blacks report less stress and higher levels of optimism than both poor whites and poor Hispanics. Put all this together and the toxic stress/weathering hypotheses look shaky. The racial differences are modest and don’t seem to correlate well with maternal mortality anyway. The problem is that every other hypothesis seems wrong too. Researchers have looked at poverty, education, drinking, smoking, and genetic causes. None of them appear to be the answer.

There are two more charts as part of Drum’s article. The article is worth reading, he cites his data, and is it perfect for a QL based course. His general conclusion at this point:

This is shocking: we still have almost no idea of what’s going on even though this has been a well-known problem for more than two decades.

Thomas J. Pfaff is a Professor of Mathematics at Ithaca College. He created this website because he believes that sustainability, ranging from climate change to social justice, should be included in all courses whenever possible.
Previous How has the U.S. ranking in the world press freedom index changed since 2018?
Next Does the U.S. import or export natural gas?