Thomas J. Pfaff is a Professor of Mathematics at Ithaca College. He created this website because he believes that sustainability, ranging from climate change to social justice, should be included in all courses whenever possible.
Previous What are the projections for northeast high school graduates?
Next What book do I Recommend? 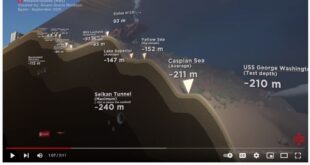 How deep are the oceans?

https://www.youtube.com/watch?v=Q5C7sqVe2Vg It is often difficult to comprehend quantitative differences. MetaBallStudios‘ YouTube channel has a collection …