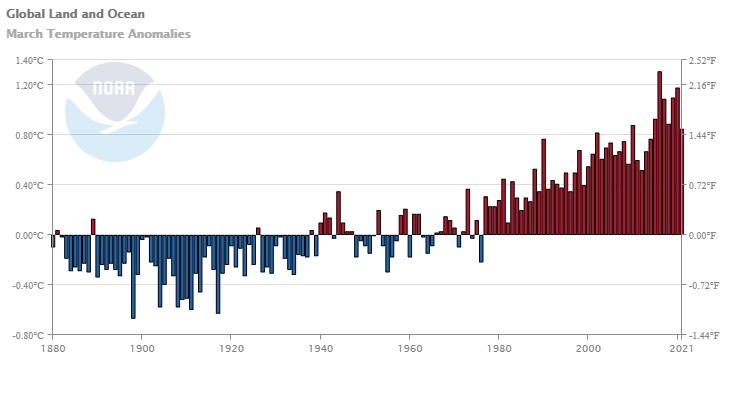 Following a strongly negative Arctic Oscillation (AO) in February 2021, a strongly positive AO was present in March 2021. In a positive phase, the jet stream strengthens and circulates the North Pole, confining the cold Arctic Air across the Polar Regions. The AO value for March 2021 was 2.11—the fifth highest March value since 1950. The peak value on March 11 was the ninth highest daily value and the third highest for a day in March. In addition, during March 2021, La Niña continued to be present across the tropical Pacific Ocean; however, it weakened in strength.

The data is available near the top of the page under Temperature Anomalies Time Series.

Thomas J. Pfaff is a Professor of Mathematics at Ithaca College. He created this website because he believes that sustainability, ranging from climate change to social justice, should be included in all courses whenever possible.
Previous How do humans impact the earth’s energy balance?
Next What is the relationship between COVID-19 deaths, education, and race/ethnicity?