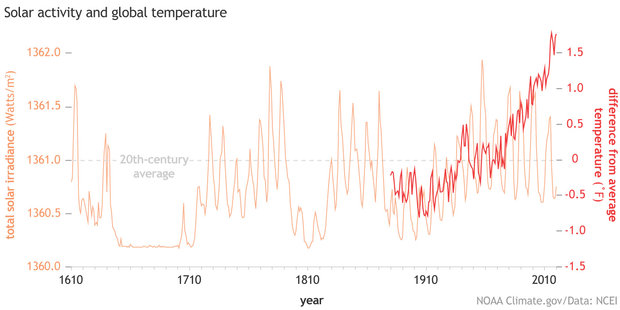 The climate.gov article Climate Change: Incoming Sunlight by Rebecca Lindsey (9/1/2009 – an oldie but a goodie) gives a comprehensive overview of what we know about the energy from the Sun. A few highlights from an article worth reading:

A comprehensive review of published scientific research by the Intergovernmental Panel on Climate Change concluded that, averaged over the solar cycle, the best estimate of the Sun’s brightness change between the pre-industrial period and the present (2019) is 0.06 Watts per square meter. That increase could be responsible for about 0.01 degrees Celsius—around 1 percent—of the warming the planet has experienced over the industrial era (0.95–1.2 degrees Celsius in 2011–2020 versus 1850–1900).

Additional experiments have compared the impacts of grand solar minimums of different strengths with different emissions paths. For example, for a future in which greenhouse gases follow an intermediate pathway (RCP 6.0), one experiment found that a relatively weak Grand Solar Minimum, during which total solar irradiance dropped by 1.3 Watts per square meters for 5 decades in the middle of this century, could reduce global warming by 10%. To reach a 20% reduction in global warming, the Grand Solar Minimum would have to be very strong: sunlight at the top of the atmosphere would need to drop by nearly 6 Watts per square meter. A drop that large would significantly exceed what our current understanding of the Sun says is realistic.

Another study estimated that at pre-industrial carbon dioxide levels, summer insolation at 65° North need only dip 0.75 standard deviations below the mean—about 15 Watts per square meter—for summers to be too cool to melt all the winter snow, a low that Milankovitch cycles predict we will next hit about 50,000 years from now. At 400 parts per million, summer insolation would need to fall twice as much—a low we will next see 125,000 years from now. At carbon dioxide levels above 560 parts per million, the study predicted, no Milankovitch variation within the next half million years will be low enough to trigger an ice age.

There are a number of graphs and some links to data.

Thomas J. Pfaff is a Professor of Mathematics at Ithaca College. He created this website because he believes that sustainability, ranging from climate change to social justice, should be included in all courses whenever possible.
Previous How can ocean temperature profiles connect to calculus?
Next How has maternal mortality rates changed?