How well do we understand rising sea levels?

NASA’s Vital Signs of the Planet feature,  Keeping score on Earth’s rising seas by Pat Brennan (9/1918) summarizes a recent paper that  “ ‘closes’ the sea-level budget to within 0.3 millimeters of sea-level rise per year since 1993.”

A just-published paper assembles virtually all the puzzle pieces – melting ice, warming and expanding waters, sinking coastlines and a stew of other factors – to arrive at a picture of remarkable precision. Since 1993, global sea level has been rising by an average 3.1 millimeters per year, with the rise accelerating by 0.1 millimeter per year, according to the study published Aug. 28 in the journal, “Earth System Science Data.”

“Global mean sea level is not rising linearly, as has been thought before,” said lead author Anny Cazenave of France’s Laboratory for Studies in Geophysics and Oceanography (LEGOS). “We now know it is clearly accelerating.”

The above paragraphs can be used as calculus in the news and sea level data is available from NASA’s Sea Level page. 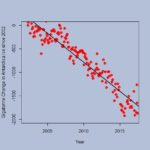