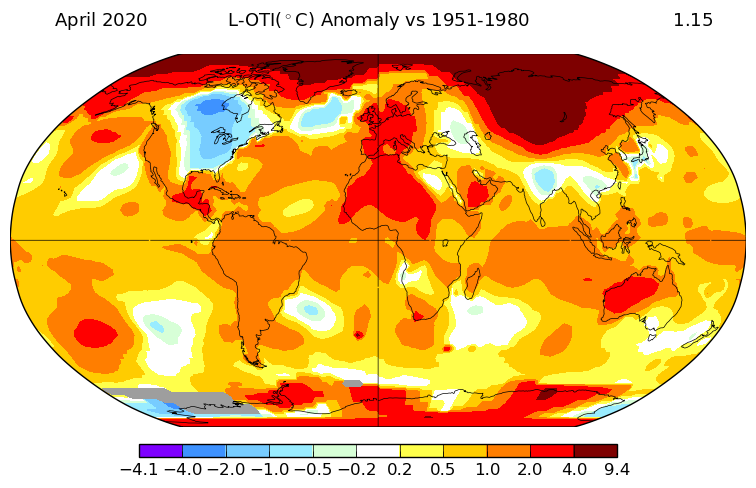 For those of us living in the northeast or a good part of the U.S. we might have felt that April was cold and it was. It is easy to use that as evidence that climate change is “fake news” yet it is good to keep in mind that if it is cold where you are it is likely much warmer somewhere else. The map here is from NASA’s GISS Surface Temperature Analysis page where similar maps can be made for a variety of time periods.  Here we can see that for April 2020 parts of the U.S. and Canada where one of the  few cold spots in the world. The rest of the planet was warmer.

Time series data is available on the NOAA page. Note that NASA uses 1951-1980 as their baseline while NOAA is using the 20th century. This accounts for the slight differences in their calculations on April’s anomaly from the baseline.

Thomas J. Pfaff is a Professor of Mathematics at Ithaca College. He created this website because he believes that sustainability, ranging from climate change to social justice, should be included in all courses whenever possible.
Previous Where are COVID-19 predictions?
Next How many billion-dollar disasters?