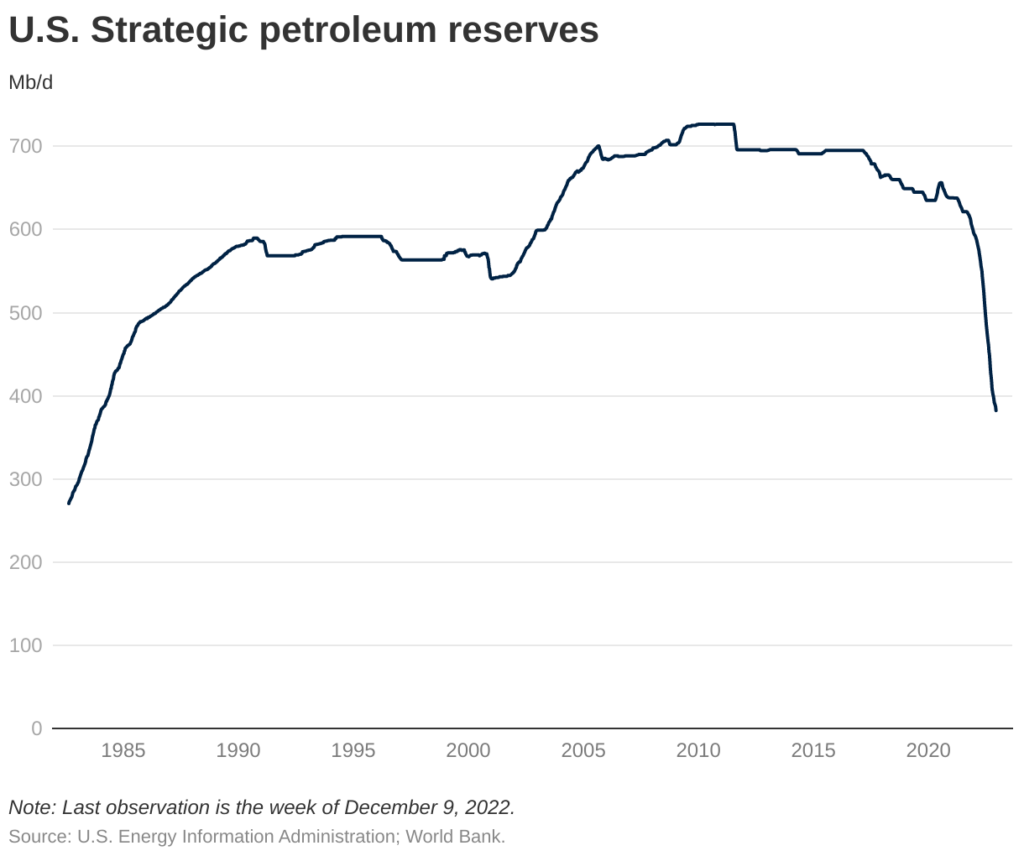 The World Bank blog post Oil prices remain volatile amid demand pessimism and constrained supply  by Peter Nagle and Kaltrina Temaj (12/16/2022) is a overview of the oil market. There are seven graphs but one, U.S. strategic reserves, caught my attention and is copied here.

The United States and other OECD countries have released large amounts of oil from their strategic reserves, equal to about 1mb/d since March.  These releases have sharply reduced the level of strategic reserves—for example, the U.S. Strategic Petroleum Reserve (SPR) is currently at its lowest level since 1984—reducing available buffers in the event of future disruptions to supply. Conversely, the U.S. administration has announced it intends to start to refill the SPR at a price of about $70/bbl, potentially putting a floor under prices.

One other fact of interest:

OPEC+ members agreed to cut their production target by 2 million barrels per day starting in November 2022 and lasting through end-2023.  The actual reduction in production in November was much smaller than that (around 0.5 mb/d), largely because many members were already producing well below their target due to operational issues and capacity constraints. Indeed, even after the reduction in the production target, the group’s actual production was still short by 1.7mb/d. Spare production among the group remains low by historical standards, at around 3.5 mb/d or 3.5 percent of global oil demand.

Ample quantitative information in the article along with rates for calculus. There aren’t links to data but the sources are cited and shouldn’t be too hard to find.

Thomas J. Pfaff is a Professor of Mathematics at Ithaca College. He created this website because he believes that sustainability, ranging from climate change to social justice, should be included in all courses whenever possible.
Previous How hot was Nov 2022?
Next How much do your legos cost?