How does a small increase in average temperature increase the chance of extremes?

The Climate Central post, Small Change in Average -Big Change in Extremes, summarizes the idea well with the graph. As the mean shifts to the right, there is a significant increase in the chance of extreme temperature. The animated gif on the site is perfect in expressing the idea.

That’s what we are seeing across much of the country. Average summer temperature have risen a few degrees across the West and Southern Plains, leading to more days above 100°F in Austin, Dallas and El Paso all the way up to Oklahoma City, Salt Lake City, and Boise.  It’s worth noting that this trend has been recorded across the entire Northern Hemisphere, as shown in this WXshift animation.

You should check out the WXshift page they link to. This material is perfect for a stats course. It is also worth pointing out that the pictures here assumes the standard deviation stays the same, but there is evidence that it may be increasing. The effect is a flatter more stretched out density, with even greeter likelihood of extremes. 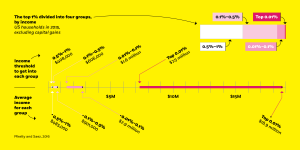 In which city has winter warmed the most? 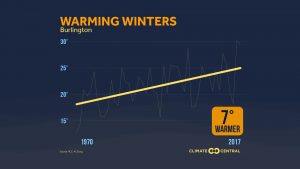 Find out by going to Climate Central’s post, See How Much Winters Have Been Warming in Your City.  The winner is Burlington, Vermont, with about 7 degrees F of warming since 1970 (graph here from the post). There is a drop down menu where you can select from most major cities in the U.S. They don’t provide the data, unfortunately, but they do provide a clear methodology so that you can create the data set for your city. You can get weather data from NOAA Climate Data Online. There is great potential here for student projects in statistics courses. 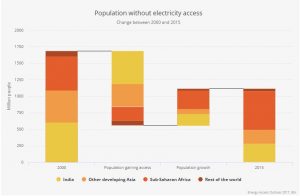 The International Energy Agency’s Energy Access Outlook 2017 has your answer. For example, the chart here answers the question for 2000 and 2015 with an interesting graphic that includes how the change occurred. In 2000, 1684 million people lacked access, 1130 million people gained access, but population grew by 557 million people, leaving 1111 million people without access in 2015. The graph is interactive on the page and breaks these changes down into four regions. There are eight other interesting charts related to electricity as well as access to clean cooking.

How do types of electricity production compare? 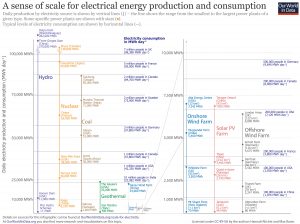 The Our World in Data blog post, A sense of units and scale for electrical energy production and consumption has the graph here. It provides a comparison of the scale of different types of electricity production along with comparisons to consumption. For example the Three Gorges Dam is worth 270,000 MWh while the Hoover Dam provides 11,000 MWh.  On the other hand the Alta onshore wind form generates 7,342 MWh.  The post has a nice discussion of units as well as information about the types of electricity generation they highlight in the graphic. 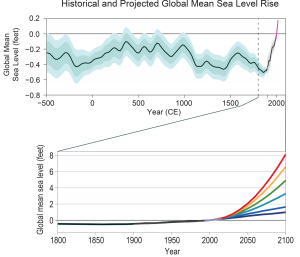 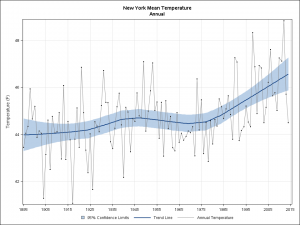 These charts present three color-coded time series. The gray line represents the annual (or seasonal) temperature value. The blue line shows the overall trend in a fashion that smoothes out the year-to-year variability in temperature. The light blue shaded area represents the 95% confidence interval for the trend. The smoothed temperature is constructed using a locally estimated scatterplot methodology known as LOESS.

There does not appear to be easy access to the data, but if you contact them (Contact link on the top bar) they may send it to you. Either way, the graphs include confident intervals, useful in stats, and can be used in QL courses. There is also an interactive U.S. temperature map. 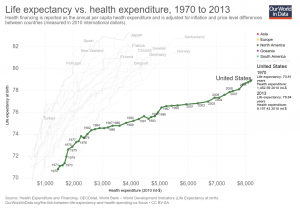 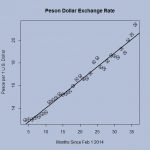